Who Hears Here?: On Black Music, Pasts and Present

The Energy Transition and Indigenous Communities

Race, Climate, and the Built Environment

Spyware and the Press

A New Era for the Sake Industry in Japan and Beyond

The Missing, the Dead and the Survivors

The Yanomami Struggle, by Davi Kopenawa

Screening of A tale of love and desire by Leyla Bouzid

Screening: Leave No Trace: A Hidden History of the Boy Scouts

Book Talk. "Free: A Child and a Country at the End of History"

Screening of Angels by Jasmine Bissete

Introduction to the Bloomberg Terminal

Beyond Marco Polo: Venice and the Mongols in the 13th-15th Centuries

The Aftermath of the Attacks in Brazil’s Capital

Vladimir Gandelsman: "A Man Only Needs a Room", Poetry Reading

Saxophone Colossus: The Life and Music of Sonny Rollins

The Rat Academy in Morningside Heights

Bioethics in Film: From Screen to Seminar "Seizing Hope"

Ovarian Aging: A Target for Geroprotection in Women

Designing for Dissemination, Sustainability, and Equity

Autism: From "Neuroplacentology" to Your Offices and Patients

Music Monday at The Forum

Wrestling with Social and Behavioral Genomics

Non-literary fiction: Art of the Americas under Neo-Liberalism

Dismantling the Architectures of Liberalism

On Public Monuments: Contemporary Art and Social Protest in Chile

"Creativity and the Arts in Social Justice, Repair, and Forgiveness, a talk with Marc Bamuthi Joseph

Leave No One Behind! New Strategies for the Global HIV Response

Jonathan Pacheco Bell - Embedded Planning is Worth The Struggle

The Rhetorical Foundations of Russian Politics

Democracy, Illiberalism, and the Contentious Politics of Gender

Make it New: The Many Dantes of the Twenty-First Century

Self-Tracking and the Experience of Algorithmic Technology

Mutualism: Building the Next Economy from the Ground Up

Decoupling Europe and Russia After an Unanticipated War

Monkeypox and Protecting Communities of Color​

The Newest New Yorkers: a Community Teach-in on Recent Migration

The Debate over New Forms of Capitalism in Japan and the U.S.

Brazil Seminar: Brazil After the Elections

How Sanctions Backfire: A Book Talk and Fireside Chat with Agathe Demarais

Michelangelo’s “David” and his Sling: A Talk by Luca Giuliani

Bioethics in Film: From Screen to Seminar

Toward a Data-Driven Society

The Ethics of Looking and Collecting in the Age of Restitution Echoes of Attica: A Play With Rap and Gospel Music, Remembering the 1971 Attica Prison Uprising

This Event is open to the public

Echoes of Attica, a music/theater piece about the 1971 Attica prison revolt, will be performed by formerly incarcerated actors and musicians, to raise awareness about its relevance to the current outbreak of state violence against communities of color.

“Attica in 1971 is a picture of what can happen to you,” said Carlos Roche, an 80 year old survivor of the Attica prison massacre. “it’s not just the past. It’s the present. It’s the future. It’s all of us.” Roche will be introducing the play, as well as taking part in a post-performance discussion.

The play is based on court transcripts, declassified FBI files, and interviews with men who survived the assault, during which 29 incarcerated men were shot to death by state police in what the new york state official commission on Attica called “the bloodiest one-day encounter between Americans since the civil war.”

Echoes of Attica includes original songs written and performed by rap poet and activist BL Shirelles, and the gospel singer simply Naomi. Also featured in the performance is Dario Peña, who played the title role in Macbeth when he was serving time in Sing Sing correctional facility, and studying theater with Ron Jenkins, the author of “echoes of Attica” and a senior fellow at yale’s institute of sacred music. The cast also features Eddie Torres who spent ten years working with men on death row and is appearing off-broadway in the playwrights horizon production of “downstate.” 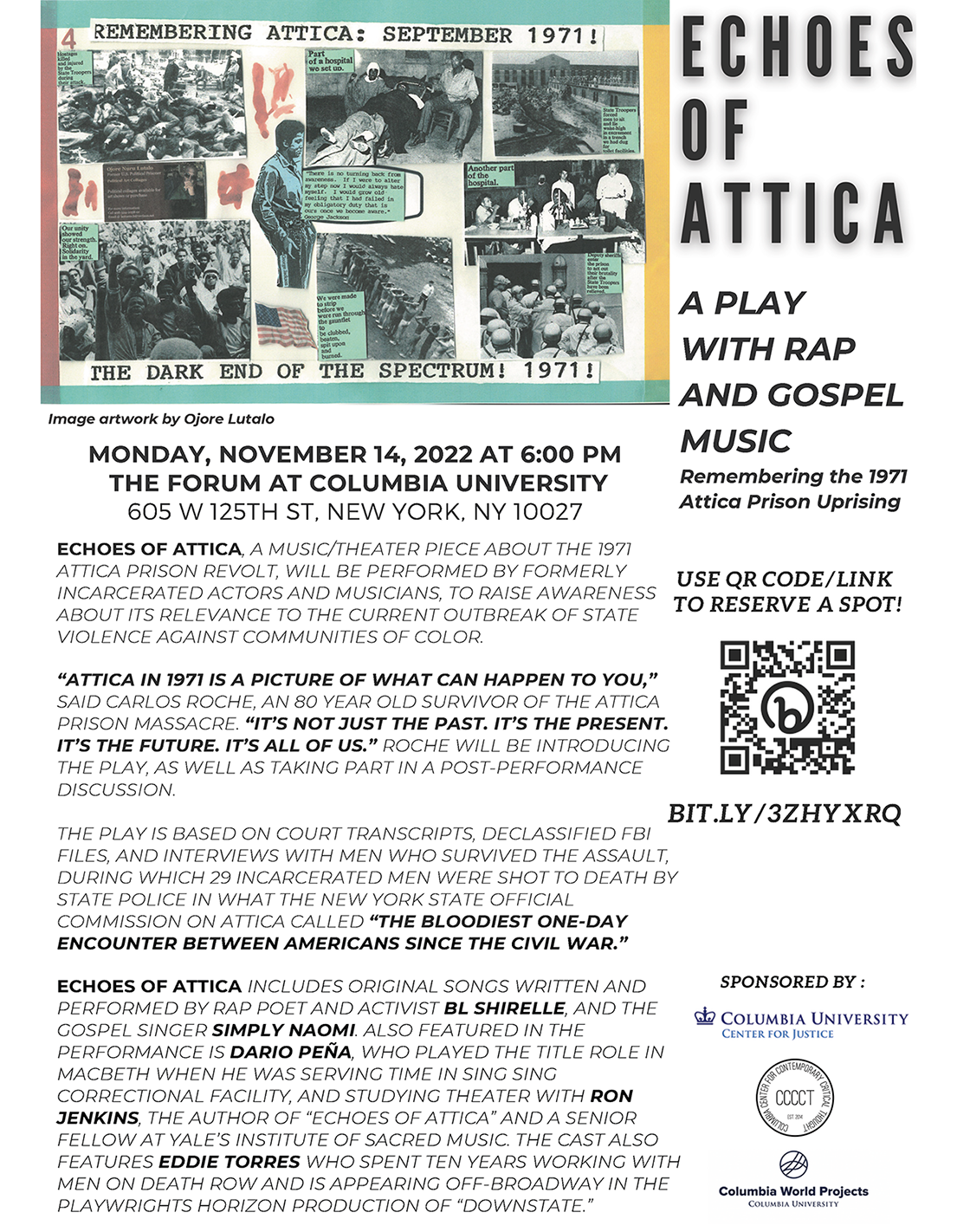