Kick off the holiday season in Harlem with the Harlem Night Market at La Marqueta, created through a partnership between NYC Public Markets (run by NYC EDC), Uptown Grand Central, TBo Harlem & Union Settlement. This season’s edition returns Saturday, December 3, with an expanded number of vendors across three blocks of the market under the train tracks at Park Avenue, plus neighborhood-favorite DJs Stormin’ Norman, Ted Smooth and friends warming up the dance floor.

This year, there will be more family fun than ever before — including visits with Santa all three weekends, a bounce house and Harlem Night Market 360-degree photo booth. On December 10, take a trolley from the market to El Museo del Barrio and the East Harlem Holiday Tree. On December 17, hop the trolley to our pop-up ice skating rink at Uptown Grand Central’s 125th Street community plaza, which now features a new light installation by NightSeeing called “Uptown Flash.”

“Since its start as one of New York City’s public markets in the 1930s, La Marqueta has achieved a storied status as the heart of entrepreneurship for East Harlem and all of Uptown,” said Carey King, director of Uptown Grand Central. “For nearly a century now, these blocks under the rumbling Park Avenue train tracks have launched thousands of entrepreneurs with great products and great ideas. It’s our honor to be a part of showcasing that vibrancy for the holidays.”

Shoppers will be able to support more than 50 local makers and chefs with booths inside La Marqueta’s retail market (114th/115th streets), the La Placita event space (115th/116th streets), and Urban Garden Center (116th/117th streets). See below for the list of vendors.
“We’re so happy to be back for our third market in four years at the historic La Marqueta,” said Tony Rahsaan, founder of TBo Harlem and the Harlem Night Market. “Like last year, this will be another expanded market, due to the high demand to get in. Especially at this time of year, this market is super important to our maker community because, for some, this is the season that they make the lion’s share of their annual earnings.”

On the second and third weekends, the Harlem Night Market will also connect to points of interest north and south along the Park Avenue Viaduct. Trolleys will run along Park Avenue, traveling south toward El Museo del Barrio at 105th Street and East Harlem Holiday Tree at 106th Street (December 10), and north to 125th Street to the pop-up ice skating rink and

Trolley pick-up and drop-off will be at 115th Street, which has served as an Open Street this past season. Entry to the trolley, El Museo and the ice rink are free, though attendees are requested to register ahead for the ice rink here.

“The trolleys will connect La Marqueta with several of our other winter destinations here in East Harlem,” said Michelle Cruz, director of Economic Development at Union Settlement. “We’re so glad to partner on the second and third weekends, so visitors can support local vendors at La Marqueta, then hop aboard and experience more family fun across the neighborhood.” 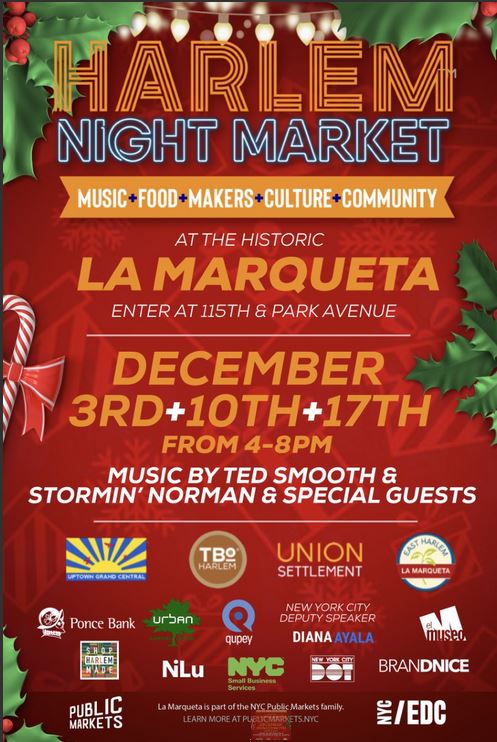