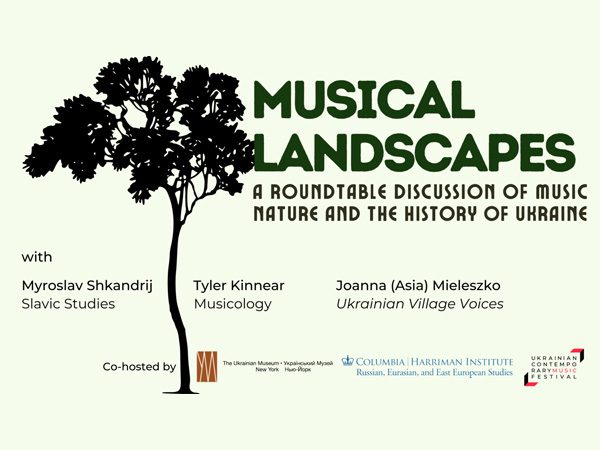 Nature has always been an important part of Ukrainian history. This cultural preoccupation gains contemporary salience as the study of music and the general public become increasingly engaged in issues surrounding changes in climate and the future of our planet. Join us for an exploration of Ukrainian history and language, studies in eco-musicology, and compositional approaches to engaging audiences in climate concerns.

The Ukrainian Contemporary Music Festival 2022 will journey through the ancient Ukrainian landscape, mythologies of nature and centuries of agrarian life, to the modern city. From the forest to the fields to the urban jungle, explore Ukraine’s diverse landscapes as we contemplate the role of music in our planet’s past, present and future.

Friday, March 18 at 7:00pm
Kaufman Music Center, Merkin Hall
Named after the 1911 poetic play by Lesia Ukrainka, this concert reveals contemporary composers’ preoccupation with the natural world and the myths of Ukrainian culture that have grown from this mysterious setting. Learn More >

Saturday, March 19 at 8:00pm
Kaufman Music Center, Merkin Hall
Many Ukrainian folk songs begin with the formulation “In the field…”, before describing facets of agrarian life. Our second concert explores music inspired by the folk cultures that shaped centuries of this existence. Learn More >

Sunday, March 20 at 3:00pm
Kaufman Music Center, Merkin Hall
Our final concert interrogates the negative consequences of human life on the Earth, moving from the land as a site of magic and abundance to one of apocalypse and devastation—a sobering warning for the future. Learn More > Tyler Kinnear is an Instructor in the David Orr Belcher College of Fine and Performing Arts at Western Carolina University, where he teaches world music and interdisciplinary arts courses. Kinnear also serves as an Adjunct Instructor in the School of Music at the University of North Carolina School of the Arts, offering a special topics course on soundscapes. His research interests include sonic art and the environment, histories and theories of listening, and global music studies. His work has been published in Chigiana: Journal of Musicological Studies, Ecomusicology Review, Intersections: Canadian Journal of Music, and Organised Sound. He is principal investigator of Sonic Histories, an interdisciplinary research initiative studying how students experience histories of race, class, and belonging at an institution of higher learning through sounds heard and imagined. Joanna (Asia) Mieleszko is a singer, conductor, protector of the (very) old, and pioneer of the daringly new. She has been the acting artistic director, curator, and principal vocalist of AEON Ensemble, ushering in twelve world premieres and fifteen synesthetic collaborations since its resurrection at the 2019 Queens New Music Festival. Outside of ÆON, Asia is an accomplished interpreter of renaissance, contemporary, and Eastern European repertoire. Recent highlights include performances at the Summer Institute for Contemporary Performance Practice, Ukrainian Contemporary Music Festival, JetLAg Fest, Princeton’s SoundKitchen, Merkin Hall, Brooklyn Folk Festival, and Zlatne Uste Golden Festival. As the musical director of Ukrainian Village Voices, she concluded an ethnographic and performance tour in Ukraine which culminated in a sold-out multi-media performance at the Ukrainian Museum in 2018. In addition to leading weekly rehearsals with UVV, she has led workshops of Ukrainian polyphony across the country sponsored by the New York Folklore, Brooklyn Arts Council, and the Lower Manhattan Cultural Council. Myroslav Shkandrij is Professor Emeritus at the University of Manitoba, where he taught in the Department of German and Slavic Studies until 2019. He has also held professorial appointments at the universities of Calgary and Ottawa, and in 2021 was Visiting Professor at the Harriman Institute, Columbia University. His books and articles have explored twentieth-century Ukrainian and Russian literatures, the avant-garde, Ukrainian-Jewish relations, nationalism, and the history of revolutions in Ukraine. He has curated several exhibitions on avant-garde art of the 1920s, and translated works by a number of Ukrainian authors into English, including Serhy Zhadan and Mykola Bazhan. Shkandrij’s books include Modernists, Marxists and the Nation: The Ukrainian Literary Discussion of the 1920s (1992), Russia and Ukraine: Literature and the Discourse of Empire (2001), Jews in Ukrainian Literature (2009), Ukrainian Nationalism: Politics, Ideology, and Literature, 1929-1956 (2015), Avant-garde Art in Ukraine: Contested Memory, 1910-1930 (2019), and Revolutionary Ukraine 1917-2017: Flashpoints in History and Contemporary Memory Wars (2019).