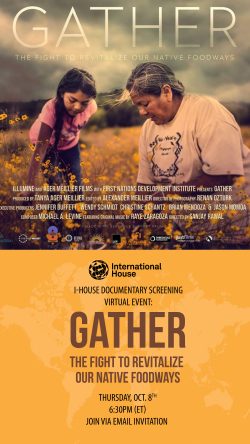 Synopsis: Gather follows the stories of natives on the frontlines of a growing movement to re connect with spiritual and cultural identities that were devastated by genocide. An indigenous chef embarks on a ambitious project to reclaim ancient food ways on the Apache reservation; in South Dakota a gifted Lakota high school student, raised on a buffalo ranch, is proving her tribes native wisdom through her passion for science; and a group of young men of the Yurok tribe in Northern California are struggling to keep their culture alive and rehabilitate the habitat of their sacred salmon.

All these stories combine to show how the reclaiming and recovery of ancient food ways is a way forward for native Americans to bring back health and vitality to their people.

Sanjay’s work has been supported by Ford, Bertha, BritDoc, Fledgling, 11th Hour Project, NoVo, and the Omidyar Network. His work has won an assortment of honors include a James Beard Media Award.