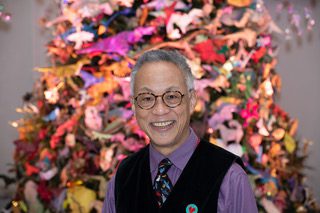 ABOUT TALO KAWASAKI
Talo Kawasaki is a Nisei born in New Orleans to parents who immigrated there and works in Brooklyn as a visual artist who splits his time between graphic design and origami. He’s best known online as the originator of the Patty Bat, an origami action model with realistic sounding flapping wings. The video alone has had over 1 million viewers.

Talo is currently a co-designer for the American Museum of Natural History’s origami holiday tree, a 13 ft tall tree decorated with over 1,000 incredible animals and natural forms. He’s a member of and contributing creator of models to OrigamiUSA, the national organization promoting origami and locally with the Origami Meet up Group (OMG) who meet regularly twice a week to fold and teach in NYC.